This week I spent some time walking through parts of Redwood City away from our downtown. While there continues to be a great deal of activity downtown that is well worth reporting on, I try not to forget that Redwood City is much more than its downtown, and that there are many other interesting things to see and do elsewhere within the city limits.

This week I took a route that I’ve taken several times before—a route that circles the western part of the city. It began, as always, near Sequoia Hospital. I follow Alameda to Woodside Road, at which point I make a left and follow Woodside to El Camino Real. I then make another left and follow El Camino Real to Broadway. Finally, I make one final left and head back up towards Alameda. That makes for a giant loop, one that is just shy of eight miles. And one along which there are few large buildings, but many houses, parks, and smaller businesses.

Redwood City’s labyrinthine borders being what they are, from Brewster Avenue most of the way to Harding Avenue the east side of the street is within the city limits, while the west side is not. Within the city limits streets are supposed to have sidewalks, but for various historical reasons there is no sidewalk on either side of Alameda de las Pulgas from Brewster all the way to Harding. Fortunately there is a wide dirt strip that, on the east side at least, is fairly flat and level. As long as you are willing to zigzag around the parked cars, trash cans, and the like, the dirt strip is reasonably easy to navigate. But my understanding is that most or all of the east side will get sidewalks once the two large houses being constructed there are completed. I paused for a while to study those houses, noting that even though they are being built side-by-side by the same builder, they have radically different styling:

The unusually slanting flat roofs employed by the house on the right (the house’s two main roof sections slant downwards towards the center of the house) and the two large sliding glass doors leading to a balcony on the street side mark this as a house with modern styling. As you can see, it differs quite a bit from the more contemporary design of the house on the left.

After taking several pictures, I trudged on. Although Alameda de las Pulgas is a somewhat busy thoroughfare, I find it surprisingly pleasant to walk along. It is especially pleasant when you get past Vera Avenue (which heads down to Roosevelt Elementary School); there are more trees here, and the traffic seems a bit less busy. I was interested to see that one front yard had a smaller version of Dug the Dinosaur; this one wasn’t decorated, though. I also got a kick out of the handful of homes that have already begun decorating for Halloween. Some people sure love that holiday!

I am pleased to report that the painted rocks are being kept up (I’ve mentioned these before—they’re in the parking strip in front of a house on the east side of Alameda, almost to Carson Street). It appears that there are new ones, so the admonition to “Leave a rock” must be working. Regardless, I’m glad that they are there: this is exactly the kind of thing you can only see if you walk, and I find such personal yard art to be charming. I do need to create a rock of my own, and remember to drop it off sometime. My idea is to put my logo on one, along with the phrase “Walking Rocks!”. If you go by and see these, be sure and look for my rock, and consider leaving one of your own.

When I got to Woodside Road I crossed over to the south side: I wanted to check in on S’Bastians Coffee, which is located at 1725 Woodside Road just behind Lucia’s Restaurant and Pizzeria. They only have five reviews on Yelp so far, but all five gave them five stars, so you coffee lovers should check them out. They’ve been open for a couple of weeks now; when I went by, at 1:00 on a Wednesday afternoon, people were sitting at the tables enjoying their coffee (or tea—they apparently have a good tea selection as well). The place looks nice, and very clean. They’re closed on Mondays, but open Tuesday through Saturday from 7 a.m. to 3 p.m., and from 8 a.m. to 12 p.m. on Sundays.

Walking on, I crossed over so that I could take a close look at the Terrace Apartments, at 926 Woodside Road. You may recall that back in 2013 we had two major apartment fires, both on this section of Woodside Road. The Terrace Apartments fire broke out at around 5:15 a.m. on October 17, 2013. Four residents of this 75-unit apartment building were sent to the hospital, and the building sustained damage that, at the time, was estimated at $3.5 million (plus another $500,000 for lost or damaged contents). The Terrace Apartments these days are a beehive of activity, with construction workers swarming over the building in a frenzy of rebuilding. As you can see, some of the windows are in place, although the sliding glass doors have yet to be installed:

It doesn’t appear that this building will be ready to accept renters before the end of the year, but hopefully early in 2016 we’ll have these 75 apartments back in our housing inventory.

As for the other apartment building that burned, there has been no visible activity there for quite some time now. Fire broke out at the Hallmark House Apartments at 1:45 a.m. on July 7, 2013. Unfortunately, one person lost their life and seventeen others were injured in that particular incident. Since then the 72-unit apartment building, which is located further down towards El Camino Real on the opposite side of Woodside Road, has been vacant, and for a while was under active reconstruction. That activity ground to a halt some time ago, however, and these days the only worker you are likely to see on site is a solitary guy sitting at a desk near the back of the ground-floor parking garage. You have to peer through the construction gates to see him, and he’s difficult to make out since the garage is mostly dark, lit only by a handful of naked bulbs hanging from the garage ceiling.

So what’s (not) going on? Hallmark House, unlike the Terrace Apartments, was an affordable housing development: all 72 apartments in the building were priced to accommodate low and moderate income households (and, for eleven of them, preference was given to seniors). So the picture is more complex here: whereas the owners of the Terrace Apartments are a typical for-profit enterprise, and need rely only upon themselves, their bank, and their insurance company when rebuilding, the Hallmark House likely also has to deal with various governmental agencies. This, I’m guessing, is the source of the delay. Which is particularly unfortunate, given that for every day that the building just sits there, that is one more day that 72 low- and moderate-income households are deprived of a home. Low income housing is very hard to come by, and Redwood City can little afford to let a project of this magnitude remain uninhabitable.

Continuing down Woodside I passed the Union Cemetery and curved left onto Linden Street, which dead-ends into Redwood Avenue just behind our Bed Bath & Beyond store. Although I had taken this route several times before, this is the first time I really paid attention to the apartment building straight ahead of me: 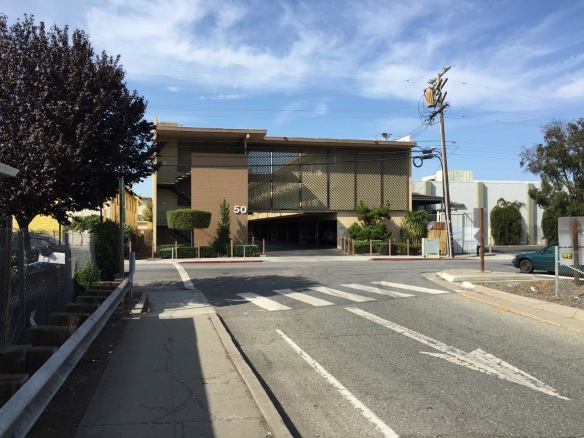 This 29-unit apartment building (“Pentagon Apartments”) sits right up against Bed Bath & Beyond (the light-colored building to the right in the above picture) so the apartments don’t have windows on that side. It has a center courtyard, and it appears from the street that all of the apartments only look into the center (which is just a driveway providing access to the under-unit parking). It’s not the most exciting building, but the location (pretty much right at El Camino Real and Woodside Road) is a good one for commuting. And the rents aren’t terribly high for our area: I found one listing for a one-bedroom apartment at $1,650 per month.

Heading up El Camino Real, I stopped to watch two guys in a cherry-picker changing out the signs at the newly named “Redwood Creek Inn”. This hotel, which sits at the corner of Harrison Avenue and El Camino Real, used to be part of the “America’s Best Inn” chain, but has gone independent and accordingly has changed their name:

The hotel does seem fairly nice from the outside, and it seems to get pretty good reviews. The rooms are pretty cheap, too: I just checked and a one-night stay in a room with a queen-sized bed costs $89. Given its rather convenient location (next to Whole Foods, and across El Camino from Sequoia Station), I’d certainly consider putting up guests there.

Just about a block further north was Myosotis Caffe—a coffee shop that opened up just about a year ago. I say “was” because the brown paper covering the inside of the windows and door hint that this place didn’t make it. There are no signs indicating that they are permanently closed, but I think that is a safe bet. I must say that their location was less than ideal: being situated on El Camino Real with no dedicated off-street parking, getting there could be a bit tough for some folks. Yelpers gave the place four stars out of five, but then again, there were only sixteen reviews. I’ll need to cross it off my list of coffee places in Redwood City (along with Cafe Zöe).

There are so many large projects getting people’s attention in Redwood City right now that it is easy to overlook the small things that make our home town really interesting. I encourage each of you to get out and do some exploring of your own, and let the rest of us know what you find. And don’t forget to look down: you, too, might find a pile of painted rocks. After all, walking rocks!

As I write this the Harambee community art project got underway. I took a break from writing and dropped by Andrew Spinas Park (at 2nd Avenue and Bay Road) to watch the fun, and indeed there was a lot of it! There were a ton of children there, both helping with the project and doing the crafts that the event organizers had planned for them. The artist, Michael Koliner, led the children (and a couple of adults) in mixing the adobe (a mix of clay, sand, and straw, apparently) and then applying it to the pre-built forms. The result will be a set of very artistic benches for the park. However they come out, it was already worth the effort: the kids were having an absolutely wonderful time. If you can make it, there will be two more of these, this weekend:

They really are fun to watch, and if you have young children, bring them: they’ll have a ball!

The results of all this hard work will be unveiled on Sunday, October 25: