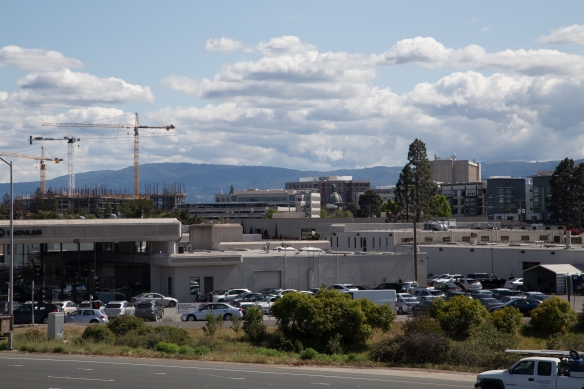 Last week while walking back from Redwood Shores I used the Whipple Avenue overpass to get across highway 101. As I crossed over the freeway I was looking at the cranes currently building the two large downtown apartments (the little kid in me just loves big machinery!). When I got to a certain point, however, I happened to notice our historic courthouse peeking out from among the other buildings that make up today’s downtown. I couldn’t help but think about how, if the courthouse was alive, it might feel about being surrounded by newer, ever taller buildings. Conceivably there might come a time where the courthouse won’t even be visible from beyond the downtown core. When that time comes, I can only imagine how it’ll feel in the heart of downtown: it’ll be as if one is standing at the bottom of some great canyon made up not of mountains, but of buildings. Somehow, that doesn’t sound like it’ll be a very comfortable place to be…

My last few posts have been about subjects beyond our ever-changing downtown. Thus, I thought it was time that I head back downtown to note the recent changes. Right off the bat I will say that there have been no major ones, although there have been a number of small changes—the kind that I like to point out are often only visible when one is on foot. The projects that we are used to seeing as we drive through the area continue to make steady progress, and there aren’t any significant new ones worth noting, at least that I’m currently aware of.

On my way to the downtown proper, I stuck my head into Kemuri, the Japanese restaurant that is going into the old Sidetrax spot, next door to City Pub on Broadway. I was most pleased to see that they have taken down the butcher paper that used to cover the glass doors along the front. Now we have a view inside, and can see what kind of progress they are making: 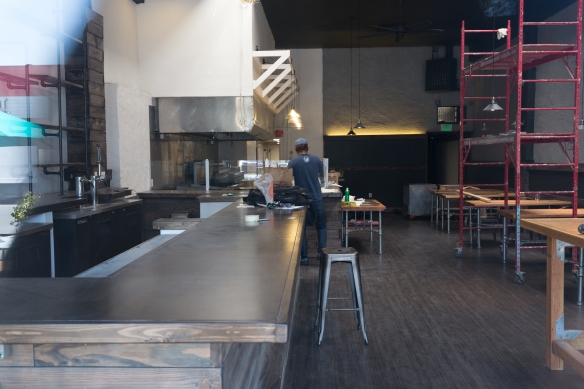 It is starting to take shape, certainly (although you wouldn’t know it from the outside, which remains untouched except for the removal of the Sidetrax sign). In an indication that they’re getting close to opening, they now have a “help wanted” sign posted on the front door. Even better, the help wanted notice includes a description of the restaurant we’ll be getting:

Although I’m not well-versed in Japanese cuisine, I’m curious about this place, and hope to check it out soon after they open. From their description, above, I have to think that teaching people like me about Japanese food will be a large part of what they will be offering.

Nearby, nothing seems to be going on at Kristi Marie’s, the little shop on the corner where Broadway crosses the railroad tracks. They are supposed to open in April, so here’s hoping that we see some action here in the next two weeks.

Howie’s Artisan Pizza (on Jefferson, by the post office) has put their sign up. To my eyes, the interior and outdoor patio look completely done. Their website still has nothing more specific than “Coming Spring 2015!”, but by now they have to be well into the training of their new employees. I expect it to open any day now, and am looking forward to their grand opening! Having tasted their pizza at their Palo Alto location, this may well become my “go to” spot for conventional pizza (as opposed to Vesta, which offers more unusual combinations). And their outdoor patio is just perfect for a city who’s motto is “Climate Best By Government Test”. If you like pizza, watch for their opening (I’ll try to tweet about it—@walkingRWC—if I they open with little warning); let’s give them a warm “Redwood City welcome” as we did for Philz Coffee. 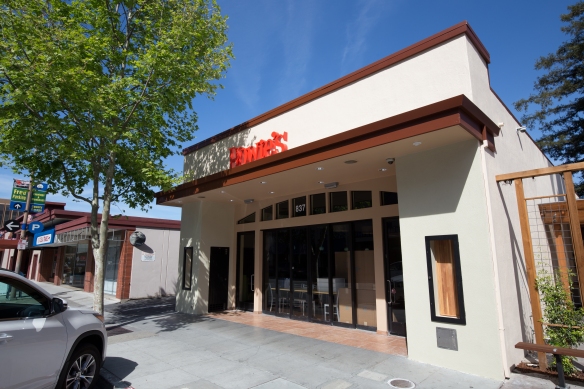 Over on Main, I checked in on The Striped Pig. This future restaurant and bar has made one interesting change: originally they were going to occupy the space at 921 Main that once housed DermaBella Spa. With the closing of the Little India Restaurant next door, however, the liquor license that was posted at the DermaBella Spa location has been moved to the Little India storefront at 917 Main. Presumably the fact that the Little India space has an existing kitchen makes remodeling a bit easier and cheaper.

The Blacksmith, which is replacing The Living Room at 2048 Broadway (between Downtown and L V Mar) had hoped to open in March, but clearly they were a tad optimistic. As you can see, while renovations continue they probably won’t be open until May at the earliest: 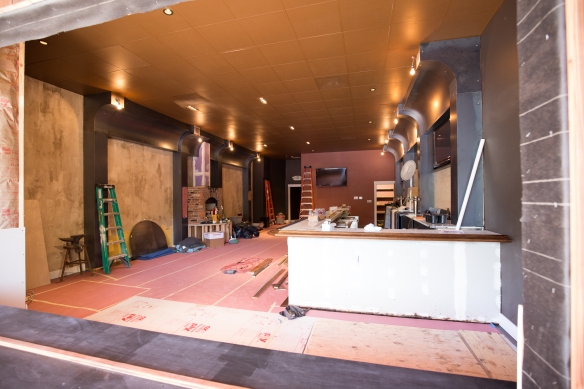 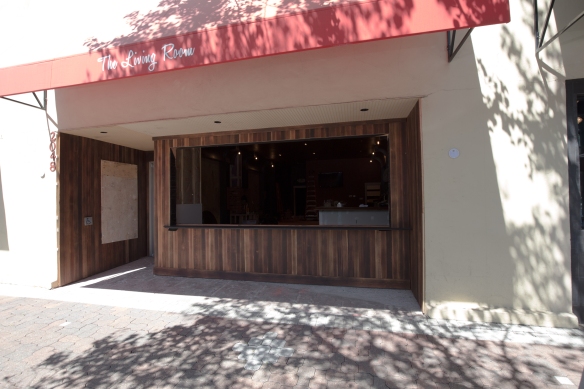 I do like how they are apparently replacing the Living Room’s fixed front windows with ones that can be opened on days with nice weather. They also have a narrow counter running along the outside of the windows, implying that perhaps people will be seated at, or will stand at, the opening.

601 Main, which is now being called “Marston” by Resmark, the developer, has topped out! In a relatively short time it seems that this L-shaped, 8-story apartment building at the corner of Marshall and Main has achieved its full height, so although the project still has a long way to go at least we can now appreciate the shape of the building and its impact on the Redwood City skyline. Here is a view from Main: And here is the developer’s latest rendering: 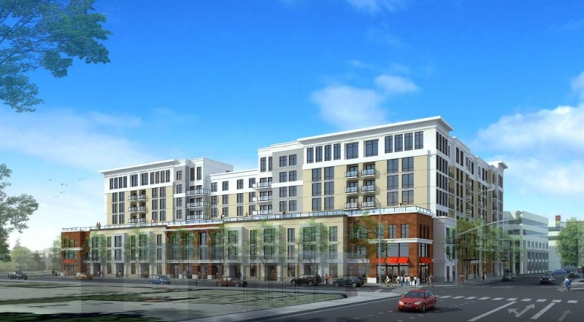 I should note that Indigo (its nearby neighbor, the 10-story development at 525 Middlefield) continues to rise into the air; it still has a way to go before it “tops out.”

Moving beyond our downtown, the transformation of the former Johnny Rocket’s location in Sequoia Station to Habit Burger is now well underway. And if you know anyone who might be interested in working there, they’ve got a “help wanted” post on Craig’s List. 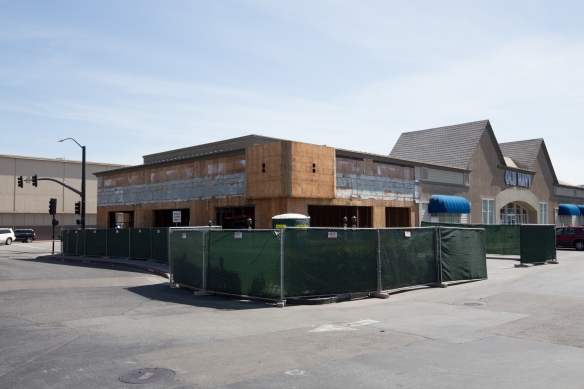 Nearby, Franklin 299—the giant apartment complex being built on Franklin that is visible from El Camino—is rapidly gaining its exterior skin. And an attractive skin it is (if you peer through the rather extensive scaffolding), with sand-colored rough stone on the lower floor and grey-painted wood siding further up: Finally, down near the intersection of Woodside and Broadway, the exterior shell of the 24-Hour Fitness is finally complete, and the interior outfitting is moving along rapidly: 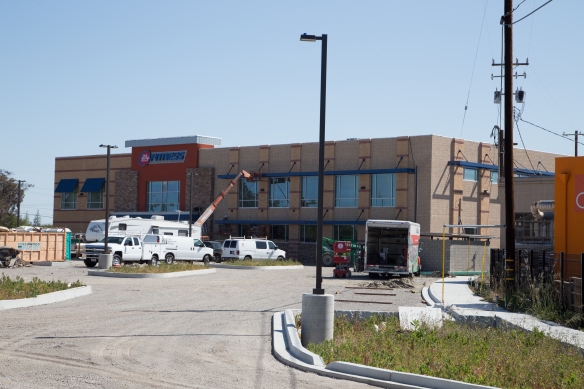 With the parking lot yet to be paved, and a lot of interior work still to be done, the contractor is presumably working at top speed in order to make the recently announced opening date of May 23. If you are considering joining or shifting your existing membership to this new location, check out their website.

Until the new projects are approved—and there are a number of them in the pipeline, that are still in the “proposed” stage—downtown activity will be pretty much limited to this kind of slow-but-steady progress. Over the next month or three, however, we’ll be seeing the above-mentioned restaurants come online, so that’ll give us something to talk about.

Finally, I wanted to leave you with a bit of a chuckle: 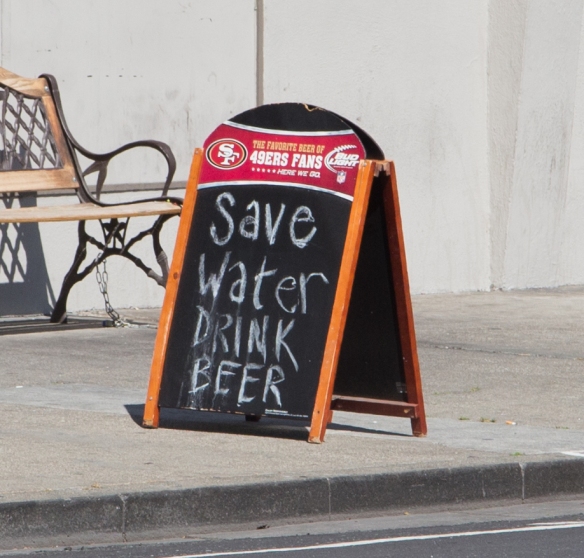 Well, I thought it was funny, anyway! This sign was brought to us courtesy of Bobby D’s Broadway, a cocktail lounge/sports bar on the corner of Marshall and Winslow.

If you don’t normally receive Redwood City’s press releases, I wanted to ensure that you knew that the City Council plans to host a pair of “town hall” meetings designed to elicit feedback from citizens about issues that concern them. The first meeting will be held this Monday, April 20, from 7:00-9:00pm at John F. Kennedy Middle School (2521 Goodwin Avenue). The second will take place on September 14, 2015 at Veterans Memorial Senior Center at Red Morton Park (1455 Madison Avenue). There is no set agenda. Instead, these are meant to be an opportunity to make your opinions and ideas heard, and to get feedback from the Mayor and other members of our City Council. As well, it should be interesting to hear what your fellow citizens have to say. Do consider adding one or both to your calendar.