My wife and I love to travel, and lately we seem to have been doing a lot of it. Unfortunately it makes updating this blog a bit tricky: without being home and able to take walks, it’s difficult to report on what’s new. Because of this, between trips I make an extra effort to get out and walk, as I did last week. We got back from our biennial “Wilson Thanksgiving” trip (to San Diego, this year) a week ago Tuesday, and headed out for a long weekend with the kids in Oregon the following Friday. This gave me almost three whole days to squeeze in a walk around Redwood City. No problem!

Usually when I walk I don’t bring extra layers, anticipating that the walk will warm me up. Not this time, however. Winter is definitely here in Redwood City, and although we can’t hold a candle to the cold weather in many parts of the country, for us it’s gotten pretty darn cold. I wore a sweatshirt for the first time ever, and was glad that I didn’t need more. Fortunately, that Tuesday was a relatively warm day (relative to the temperatures later in the week, at least!) and I went out in the early afternoon when the sun was at its most powerful. I was a tad cold when I first set out, but a little brisk walking took care of that. Also, the radiant heat from the sun was nicely absorbed by the black sweatshirt I was wearing, making me quite comfortable.

Walking down Hopkins towards El Camino you can now see the apartments being built at 640 Veterans Blvd (“The Radius Apartments”) looming over the businesses on El Camino and the low-rise apartments and homes in the Mezes Park area. At 5½ stories, the fresh lumber and plywood really stands out. My first goal had been to check out the auto dealer on El Camino; I decided to make 640 Veterans my second.

The auto dealer I was aiming for is (was?) located on El Camino between Whipple Ave. and the Burger King. For a long time this was the home of Menlo Mazda, but a couple of months ago they seemingly moved out to the join the Boardwalk Auto dealerships on the east side of 101 near the Whipple Ave. overpass. In their place came Kia Redwood City. But the Kia dealership never really moved in: the Mazda signs weren’t actually removed but instead were simply covered with canvas signs proclaiming “Kia Redwood City.” I had assumed that this was just temporary, that the proper signage was on order. But shortly before Thanksgiving, I noticed that there were very few cars on the property. And a day or two later, the signs were covered up. On this walk, this is what I saw: 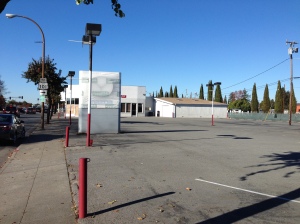 All of the “Kia Redwood City” signs are gone, and there is not a single car on the property. Interestingly, though, the showroom windows have been papered over from the inside and there are signs of activity inside. Search as I might, however, I could find no indication of what is going on, or what happened to the Kia dealership. Perhaps they’ve moved to Boardwalk as well? I haven’t been over there to check. But if so, I would have expected to see “we’ve moved” signs all over the property, directing potential customers and Kia owners looking for the service department to their new location. A web search turns up nothing; no indication that they’ve gone anywhere. And a quick check of the permits and projects list on Redwood City’s website shows no new activity on the property. It’s a mystery. If anyone knows what’s going on here, let us know! Otherwise, I expect we’ll find out once the work that seems to be going on inside the showroom is completed.

Frustrated at not being able to figure out what is going on with the Kia dealership, I headed down Whipple to Veterans. From there I could get a clear view of the progress at 640 Veterans. The buildings are pretty much topped out, revealing their full extent.

Like most of the other large-scale housing projects in town these apartments are laid out along the perimeter of the property, leaving the center of the project hollow. This large central space is where the pool, barbecues, and other outdoor communal facilities are located. Also like many of the other projects, this common area is located atop the parking garage, which occupies the first two floors of the project (the parking garage isn’t visible from Veterans; it is located behind the apartments that front directly onto that street). This gives the residents added security and privacy while they enjoy the outdoors with their neighbors.

Having observed the progress and taken a few photos, I moved on. I had some business downtown (property tax time!) and so I swung by L V Mar, the restaurant I had mentioned back in September in my post titled Broadway Bound. I was delighted to see that the restaurant is now open: you can bet that we’ll be trying it out soon. The Chef/owner of the restaurant is the same guy who started La Viga (further down Broadway); based on that, I expected that this would be a high-end version of the same. However, looking over the menu it is clear that while there is a bit of a South American influence, this is not at all a “Mexican restaurant.” Duck Breast, Lobster Raviolis, Pistachio-crusted Rack of Lamb, Beef Short Ribs…my mouth is watering just looking at the menu! Check the menu out at their website: http://www.lvmar.com.

Speaking of menus and restaurants, the other restaurant I have been keeping an eye on—Johnston’s Saltbox, on Laurel St. in San Carlos (the former location of White Oak Hardware)—is set to open any day now. In fact, we thought it was already open and went by the other day hoping to have lunch, but they aren’t quite ready. This place has taken forever to open up, and they will be dragging it out even more: when they first open, they will only be open for breakfast and lunch. It seems that they won’t be open for dinner until sometime in early 2014. For now their menu is quite simple, focusing heavily on the greens and vegetables that they are growing in their rooftop garden. I’ll be curious to see what their dinner menu looks like. For now, though, check out their breakfast and lunch menu on their website, at http://johnstonsaltbox.com. Perhaps by my next post I will have made it to one or both of these restaurants, and will be able to report on them first-hand. If one of you beats me to it, by all means let us know what you think!

1 thought on “Between Trips”