Having concentrated on projects a bit closer to home in my last few posts, I thought it was time to range a bit farther afield. I had a project on Broadway near Woodside Rd. in mind, so when my wife invited me to have lunch with her at Cafe La Tartine in downtown Redwood City I decided to walk to lunch and then go on from there. After a delicious lunch I walked her to the Middlefield parking lot (across the tracks and behind Sequoia Station) and was about to turn away when a paper sign on the small “Wilson & Wilson” law office building caught my eye. You may or may not be familiar with this building; it is a somewhat run-down looking little building in the parking lot, next to where Los Potrillos (long since closed, and very much missed by me!) sits: 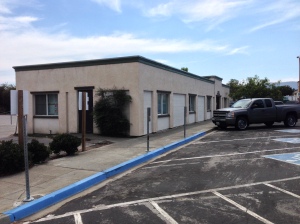 “Wilson & Wilson” (no relation to me) has been in this building for as long as I can remember, and I always wondered how their building managed to survive the construction of this parking lot; it seemed an ideal candidate for demolition. While I’m sure that there were discussions at the time the parking lot was created, presumably the owner of the building (likely, the law firm itself) wanted too much money. However, with the likelihood that this parking lot will be replaced by two rather large (296,000 square feet) office buildings and underground parking (this is the “Redwood Towers” project; I’ll get to it in a later post), it appears that the end has finally come for this little building. The paper sign on the door that caught my eye read “After 42 years we have moved” and gave a new address on Broadway. The recent construction on Middlefield that constrained access both to Theater Way and to this parking lot was in service to the Redwood Towers project: the city moved the creek that ran beneath the parking lot (“Arroyo Ojo De Agua”, an offshoot of Redwood Creek) so that it now runs under Middlefield, thus enabling the excavation of the parking lot that will be necessary for the project’s foundations and underground parking. Since the Redwood Towers project will extend all the way to Jefferson, both the Wilson & Wilson building and the Los Potrillos restaurant will both have to go. And speaking of the Los Potrillos building, while looking at the Wilson & Wilson building I happened to notice that PG&E was installing a large freestanding electrical panel right next to the Lost Potrillos building. I’m guessing that this will be providing power during the construction process, so I’d say that the Redwood Towers project is moving right along.

With my curiosity for the moment satisfied, I next decided to take a peek at nearby project that is proceeding quickly. “145 Monroe” is going to be a six-story residential building that is projected to contain 305 apartments. In case the address doesn’t ring any bells, it is essentially behind Redwood Trading Post, up against the railroad tracks. The easiest way to view it is from across the tracks: go into the parking lot between the Redwood City Main Library and Jefferson Ave., and drive around behind the library. As you gaze across the tracks, you’re looking right at it: 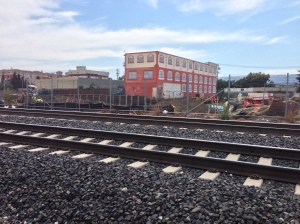 As seems to be a recurring theme, the apartments will not occupy the entire block but will instead wrap around two or three existing buildings, including the rather odd-looking building that appears in the center of the above picture. Rather than purchase and then tear down the building with the painted-on windows, 145 Monroe will be somewhat U-shaped, touching Franklin on either side of this building and extending all the way across the back of it, from Wilson St. in the north to Monroe St. in the south. Digging is well underway: this building will have two levels of parking, one fully aboveground and one “partially subterranean.” And because the building will be six stories tall, this project, like 201 Marshall, will tower over its block-mates.

Having learned all I could from this particular project at this time, I next headed down Broadway to take a quick look at a restaurant project I have been keeping my eye on. If you like Mexican food and have not yet been to La Viga, I would recommend that you check it out: my wife and I love it. La Viga has been on Broadway near Maple (about halfway between the Grocery Outlet Bargain Market and the 7-Eleven) since early 2012. This is a small, unassuming restaurant with really outstanding food. Some time ago, signs seemed to indicate that La Viga was moving into the heart of downtown Redwood City, and I wanted to check on their progress. I’m glad I did, since I discovered that plans may have changed.

The new location is at 2042 Broadway, which was formerly the home of Amelia’s Restaurant. As I quickly learned by visiting the site, work is very much underway, although perhaps not to relocate La Viga but instead to open a sister restaurant called LV Mar. This will be a more upscale version of La Viga: one article I read claims that Chef Martinez will serve “duck breast with tamarind gastrique and halibut encrusted with pumpkin seeds in a guajillo chili emulsion.” Not your typical “rice and beans” mexican food, that’s for sure…! I’m very much looking forward to trying this one, as I’ve never found a good replacement for Flaming Fresco, an upscale Mexican restaurant that disappeared from Redwood City some time ago. LV Mar is scheduled to open “this summer,” so keep an eye on it. As for the existing La Viga restaurant, don’t let the scaffolding you see here deter you:

At the moment they are in the process of re-roofing the building. The restaurant is very much open for business (except on Mondays; they are closed on Mondays) and it appears that they may remain so even after LV Mar opens its doors. Which makes sense, given that the high-end nature of LV Mar will cater to a somewhat different clientele than the more down-to-earth La Viga.

Continuing down Broadway I walked all the way past Woodside Rd. and past the main Redwood City post office. Next door to the post office I reached my goal:

This may not look like much; at the moment, there are just a couple of bulldozers pushing dirt around, and from Broadway the lot doesn’t look all that big. But due to the way that the freeway jogs to the east just behind the post office, this turns out to be a very large lot that fronts onto Charter St. with driveway access on Broadway. The sign on the fence gives away its future occupant: 24 Hour Fitness. Chuckling a bit at the irony—I was sweating from having just walked 2.5 miles on a warm day to get to the fitness center site, and I still had a 2.5 mile walk to get back home; who needs to join a gym?!?—I dutifully walked around as much of the property as I could, taking pictures. For those of you who are inclined to make use of it, 24 Hour Fitness is constructing a two-story building that will total nearly 46,000 square feet. It appears that the building will be placed back against the freeway, where there once was a warehouse of some sort. I presume that there will be entrances on both Broadway and Charter, as the property has good access to both. 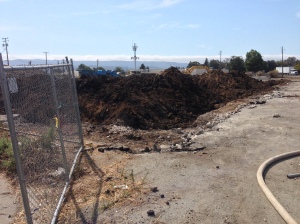 The above picture shows the 24 Hour Fitness site as viewed from the end of Charter, close to the freeway. The white semi in the upper right corner is just merging onto 101 South from the Woodside Rd. onramp. Straight ahead, seeming to rise from the pile of freshly turned earth, is a cell tower that sits next to the main post office (which, in the enlarged photo, you can barely see behind the cell tower). The edge of the hole presumably marks the edge of the new building’s foundation.

This project has a way to go, of course. Likely it’ll take a year or so to complete this building and get the fitness center open. 24 Hour Fitness has an existing center in San Carlos, on Industrial Rd.; I will be curious to see if that one remains open when this one is completed. After all, they are only two miles apart, and this new center looks to be much larger and presumably will be much nicer. But perhaps 24 Hour Fitness is simply anticipating all of the new housing being built in Redwood City, and feels that the additional capacity will be needed.

Although I won’t be joining the gym, you can bet I’ll be watching the building go up with interest. Both to see how the building turns out, as well as what effect—if any—it has on a part of Redwood City that is classified as a “warehouse district.” And its a good walk from my house to that part of town, with a lot to see along the way. You can bet I’ll be making it, and reporting on it, again.