…to those who wait. That’s a saying I heard a lot as a kid, mainly from my mother prior to Christmas. But it seems to apply in other situations as well, as I’ve observed over the years but for some reason still have a hard time internalizing. In my last post, which was something of a round-up of the status of a number of development projects in Menlo Park, I noted that the little mixed-use project slated for the corner of El Camino Real and Harvard Avenue (at 115 El Camino Real) had seemingly stalled: since the foundations had been poured, some six months ago, pretty much nothing had happened. Wouldn’t you know it, then, that as I drove by the site today on my way back from Palo Alto, I noticed that suddenly a bunch of steel beams have been erected on the site. Because I was driving I wasn’t able to get a picture of the current state of the project, but I’ll continue monitoring the site and recording its progress.

I know that the 115 El Camino Real project suddenly coming back alive had nothing to do with me, but I do find it an odd coincidence that just a week or two after I wrote about the project’s lack of activity, things suddenly started to happen. I don’t know if the delay was normal, or was due to the supply problems that people seem to be having, but either way, that particular logjam seems to have broken, and I’m guessing I’ll see somewhat steady progress for some time now. But there are other long-stalled projects that I’ve been monitoring that suddenly seem to be making progress — projects that I haven’t written about for some time now, and thus clearly haven’t been spurred by anything I’ve written. One such project is the creation of a new home for Ralph’s Vacuum and Sewing Center. Although when I last visited the Woodside Plaza site (a couple of weeks ago) there was no visible signs of activity, Ralph himself has told me that the building permits for the space have finally been issued, so work should begin soon, if it hasn’t already. He also mentioned that they signed the lease for the Woodside Plaza space over two and a half years ago: quite a long time to wait!

For those who don’t know the history, Ralph’s first opened in Roosevelt Center, more than 45 years ago. At some point it moved to the ground floor of the historic Odd Fellows building on Main Street: 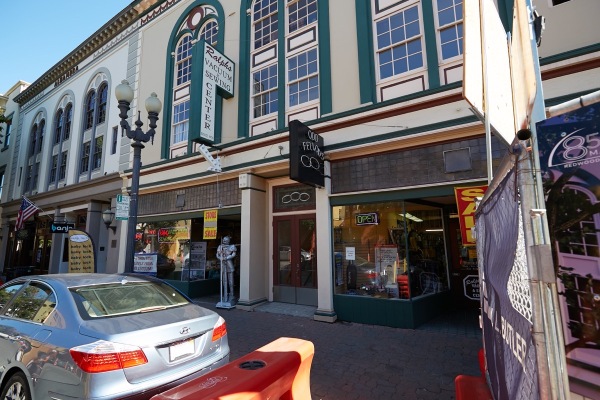 Unfortunately, skyrocketing rents caused the business to consider their options. The principals eventually signed a lease on a former dry cleaner’s space in Woodside Plaza, on the end facing Woodside Road:

Various issues, however, caused the cleanup and remodel of the space to stall, to where the space wouldn’t be ready by the time Ralph’s needed to vacate its Main Street location. Fortunately, it managed to snag a temporary location on Broadway, in one of the retail spaces within the Sequoia Hotel building: 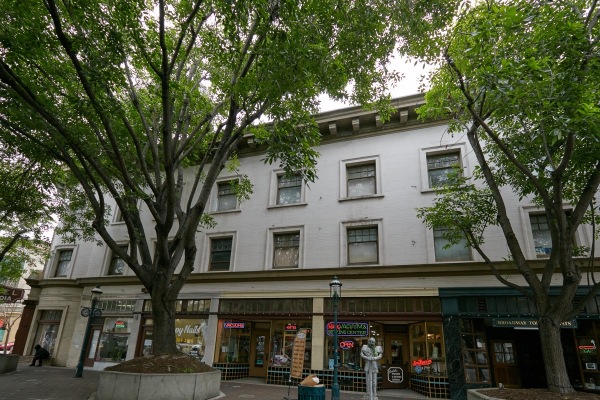 Ralph’s has now been there for far longer than expected. Hopefully, though, now that the permits are in hand, soon this popular Redwood City business will be able to move to the more expansive space in Woodside Plaza. As someone who happily patronizes Ralph’s — my wife and I bought our vacuum and a sewing machine from Ralph’s, and we rely on Ralph’s to service both our vacuum and my wife’s sewing machines (she has a few) — I can heartily recommend the business, wherever it happens to be located.

On the subject of Ralph’s former location, half of its former space, which has been empty for about two years now, finally has a tenant: 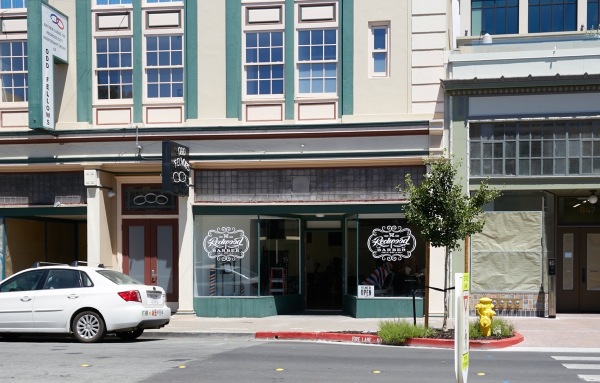 Redwood Barber Co. opened for business at 1766 Broadway back in June of 2016, but has just made the move to 841 Main St., which comprises half of the retail space on the ground floor of the Odd Fellows building. Redwood Barber Co. specializes in men’s haircuts and shaves (with steaming hot towels!) and they’ve gotten some outstanding reviews. It does appear that you can just walk in, but if so you should expect to wait. Fortunately, you can make appointments online.

Just down the street is another storefront I’ve been watching for years now, and had given up on. But once again, it appears that I should have kept the faith. Longtime readers will know that one of my favorite Redwood City restaurants was Aly’s on Main, at 911 Main Street. Aly’s opened in January of 2015, and closed in June of 2018. Since then, their storefront has remained papered over. I eventually caught wind of a restaurant (“Mezes”) that was slated to go into the space, and even got a message or two from one of the guys behind the venture. Although work did begin on refitting the space, at some point all work seemed to come to a complete standstill, leaving the space idle for seemingly over a year now. No longer, however. I don’t know if what is apparently soon to be opening there will be called Mezes or is something else entirely, but this week, as I walked down Main Street, a flash of light caught my eye. I almost missed it, but I backed up and indeed I could tell that there were lights on inside the space (I’ve annotated the photo with a red arrow pointing to where the light was peeking out from behind the paper window coverings): 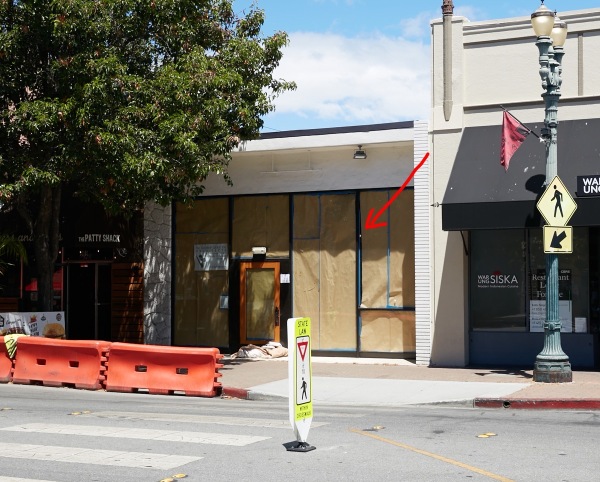 If that wasn’t enough, the drop cloth in front of the main door, and the addition of a white hand-written address sign just to the right of the door are both new and further indicate that this space is no longer sitting idle. Given that this project seems to have been revived after a year or two of sitting idle, maybe this time I’ll learn my lesson about not giving up on projects that have seemingly stalled. At least until the next one… (I’m looking at you, Broadway Plaza.)

One project I did learn my lesson on was the little housing project being built at 112 Vera Ave. Work on the five single-story side-by-side duplex buildings (for a total of ten dwelling units) began just shy of three years ago, but has proceeded in fits and starts, with several very long periods of inactivity. Even now the project seems to sit idle for weeks at a time, and then suddenly shows signs of life. This week was one of those “signs of life” moments; although I have no idea exactly what kind of work is being done right now, after a month of no sign of life, the sight of an open gate and a couple of work trucks tells me not to give up, and that this project is continuing to make slow progress: 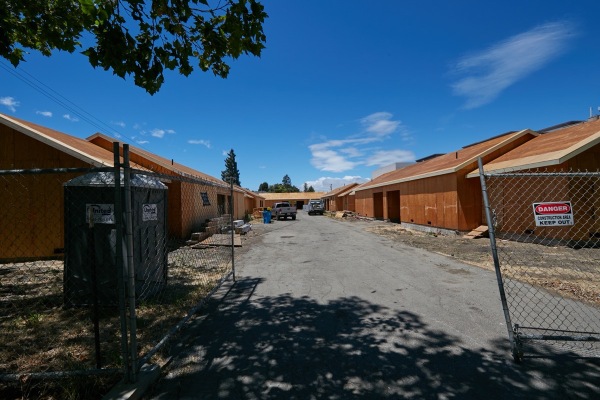 Incidentally, in case anyone is wondering what this project will look like when it is completed, I believe you need only look at the project next door, which seems to be nearly identical (but complete and occupied, of course): 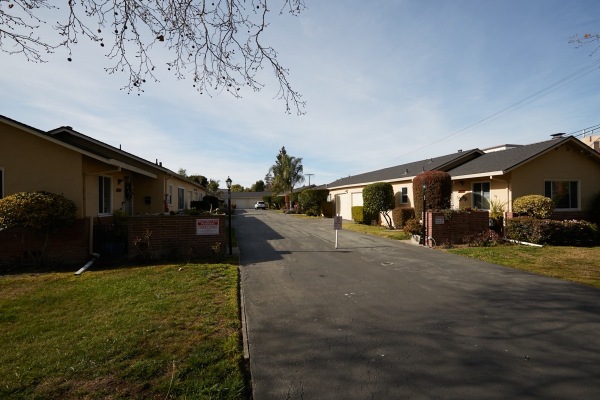 Finally, on the theme of projects that I was truly beginning to wonder if they’d ever get off the ground, we come to the Hopkins Avenue Traffic Calming Project. In truth, I knew that this project wasn’t dead, since not only has it come before the City Council on more than one occasion, I’ve recently spoken to the city’s Senior Transportation Coordinator about the project. In any case, residents of the area finally received letters in the mail officially notifying them that construction is about to begin. The project will involve replacing the various rubberized elements (median islands, bulbouts, and speed humps) that were used during the pilot phase with concrete, asphalt, and landscaping, and should take about six months to complete. Hopefully it will meet its stated objectives, which are to “increase pedestrian and cyclist safety, pavement lifespan, and slow down the vehicle speed on Hopkins.”

While some projects languish, elsewhere within Redwood City there are plenty of projects that are moving ahead full steam. This week I paid my regular visit to Red Morton Park and the site of the under-construction Veterans Memorial Building/Senior Center: 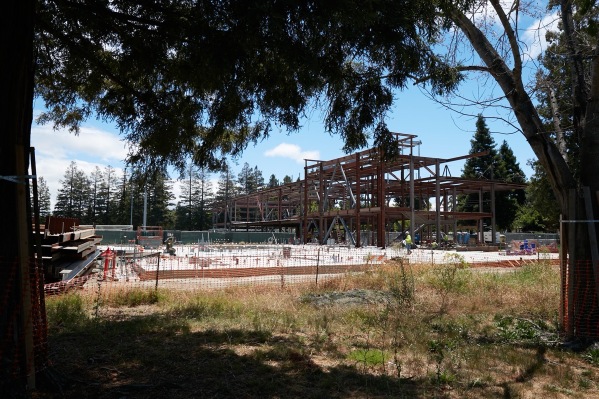 This project will presumably be in the steel framing stage for some time. Now that the remainder of the building’s foundation appears to have been poured (note the large white concrete slab in the foreground of the above image), I expect that the steel workers will work their way around the corner of this L-shaped building and do what they do best on that newest slab.

I must say, this is one impressive building. I can’t wait to see the inside of the completed project, which will contain “a theater, catering kitchen, multi-purpose rooms, senior club room, wellness/Adaptive Physical Education rooms, non-profit partner officers, gardening space, a mini-gym, Veterans exhibits, and more!”

Just blocks away, out on El Camino Real, I spent a few moments watching the steel going up on the six-story, 39-unit affordable apartment building at 1304 El Camino Real. This building is part of the ELCO Yards project, but is of course physically separate from that project’s primary site, just a block or so down El Camino. Anyway, the building’s structural concrete has set, and the small amount of steel that will be used in the building (most of the upper five floors will be framed with wood) is now being installed:

As for the rest of the ELCO Yards project, recently parcel C, which is bounded by Main, Cedar, Lathrop, and Beech streets, was cleared of the two structures that until recently stood there: the old Towne Ford Body Shop, which stood at the corner of Cedar and Lathrop streets, and the small three-story affordable apartment building that stood at the corner of Main and Beech streets. Only the asphalt remains on this block, which will one day be entirely occupied by an office building that will range in height from two to four stories.

Across Main Street, the short bit of Cedar Street that formerly terminated at the Caltrain tracks has finally been abandoned, and joined with the two large dirt lots on either side (formerly home to the Redwood Roller Rink, a self-service car wash, and the metal Perry Feeds shed) to form the project’s large parcel E. Out on El Camino Real, metal beams have been driven into the earth around parcel B (which used to be home to Towne Ford’s sales and service center), forming what I presume are the basis for the outer walls of the two-level underground parking garage that will sit beneath that block’s four-story office-and-retail building: 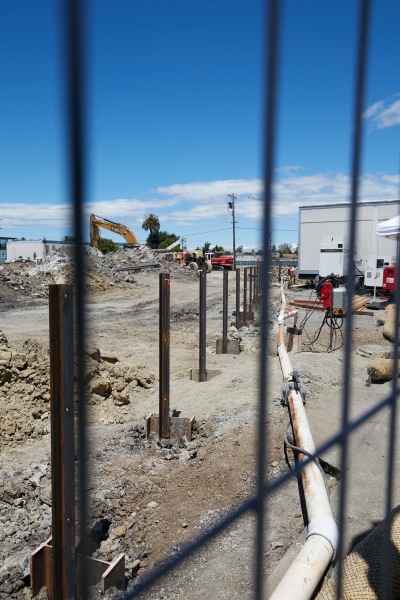 The machine that was used to insert these I-beams deep into the earth has moved on to parcel E, incidentally. That double lot will, on the surface, contain multiple buildings (two large office buildings plus a replicated feeds shed that will be a public restaurant); underneath it will have a massive two-level parking garage with room for more than 500 cars and two dozen motorcycles.

As for the five-story, mostly wooden County Office Building #3 (on Marshall St.), over the last week or two the metal framing to support the fencing that blocks most people’s view of the rooftop mechanical equipment was erected, and countless metal brackets have been added to the edges of the wooden floors, brackets to which the building’s exterior curtain walls will soon be affixed: 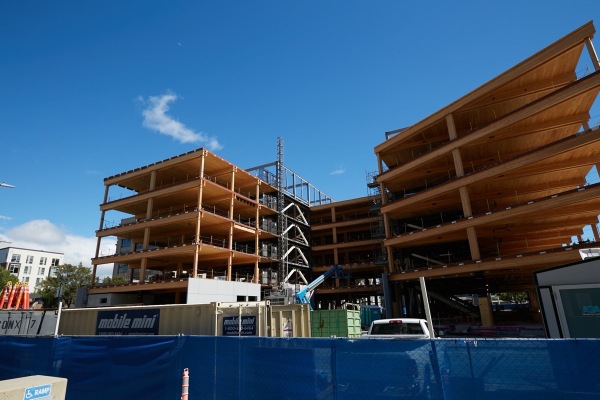 Good things come to those who wait. Hopefully all of the waiting involved with some of these projects will translate into good things for Redwood City. Now if I could just learn to curb my impatience…