You’ve probably already read about it — it’s been all over the local news — but in case you haven’t, Redwood City awarded permits to four local cannabis businesses to open retail storefronts. All four have been operating cannabis delivery businesses in Redwood City for some time, and now they will also have conventional retail outlets where adults (ages 21 and older, or 18 and older with a medical prescription) can walk in and purchase a variety of cannabis products. The city has a number of restrictions on where such businesses can operate, for instance prohibiting them from being located within 600 feet of a school.

Interestingly, three of the four will be located on Broadway in or very close to downtown. One, which will operate from the former Pomegranate Seeds location at 2301 Broadway, will be very close to Courthouse Square:

Heading east on Broadway, the next will be located in the Re/Max building that can be found where Broadway and Spring Street join (or split, depending upon which direction you are going), just across Broadway from Grocery Outlet.

The third new cannabis storefront along Broadway will be located at 1764 Broadway, next to Redwood Barber Co. (which itself is next to La Viga restaurant):

The fourth retail cannabis storefront in Redwood City will be located at 928 Whipple Avenue, the former Any Mountain store:

This last is closest to a large residential area, and as you might expect some of those residents raised objections to the proposed location. But it meets all of the city’s criteria for a retail cannabis outlet, and thus it was approved. Note that the city has the ability to issue two additional permits, meaning that at some point in the future we may see other cannabis retail stores appearing in the city — hopefully in a different part of town.

The other day I sat in on a meeting (via Zoom) that the city held with a number of Redwood City’s restaurateurs regarding the future of “parklets.” Parklets, in case you aren’t up on the latest terminology, are the little restaurant-created outdoor dining areas that occupy one or more curbside parking spaces. Back when COVID was threatening the health of our restaurants, the city created a temporary parklet program by which restaurants (and retailers, in fact, although I’m not aware of any retailers who took advantage of the program) could apply to build outdoor dining areas in one or more parking spaces in front of their businesses (and, on the portion of Broadway that was closed to vehicular traffic as part of the program, into the street itself). That program was extended once or twice, but is now set to expire on July 5 of this year.

Recognizing how popular the parklets have become — given our generally great weather, outdoor dining makes a great deal of sense — by both the restaurant operators and their patrons, the city is on the verge of transitioning the temporary program into a long-term one. Restaurateurs will have to pay fees and obtain permits, but the program will provide a path that will streamline the process for many. It will also maintain the closed section of Broadway pretty much as-is (that is, using the temporary barriers that are there today) although the city will consider putting in less temporary barriers if the money for them can be raised.

Unlike in some other communities, Redwood City is aiming to make its parklets open and inviting, in an effort to keep our dining areas as pedestrian-friendly as possible. They are discouraging the use of solid roofs (although umbrellas and, I’m guessing, fabric roofs would be OK) and high walls. Thus, we shouldn’t be seeing fairly heavy structures of the type that many restaurateurs have erected along Laurel Street in San Carlos: 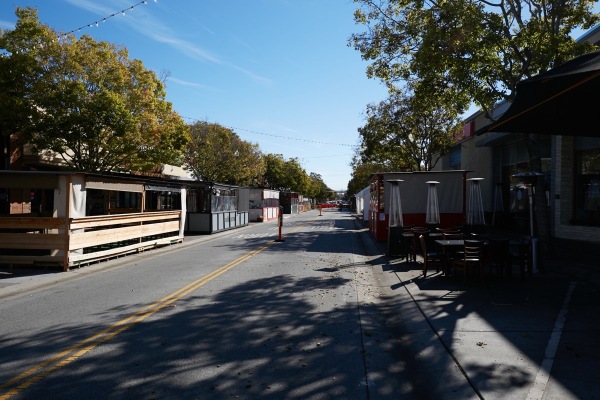 Speaking of restaurants, I was somewhat saddened to see that Arya Steakhouse, towards the Winslow Street end of Theatre Way, will be moving to Palo Alto. Fans of the restaurant — Arya says they’ve been in Redwood City for ten years now — can continue to patronize their Redwood City location until July. After that, they’ll need to make the four-mile trek down El Camino Real to Palo Alto.

This week I again walked down to watch the demolition being done in service of the ELCO Yards project. And once again I found myself mesmerized by the work of the giant excavators. The block on which the Towne Ford showroom and service center used to be was rapidly being reduced to rubble when I was there on Tuesday; if it isn’t entirely gone by now, it will be very soon. On the day I was there, two excavators were working the remaining structure from either end; one was out towards El Camino Real, and the other was on the property’s Lathrop Street side:

The excavators were both demolishing the building and making an attempt to separate the various materials (concrete, metal, wood) for recycling. There even was a machine that seemed to be reducing much of the wood to something that looked like mulch:

Looking down Lathrop Street, though, I could see that at long last, the construction fencing surrounding the 1180 Main Street office project has at long last been taken down, and the street was being cleaned in preparation for reopening it fully to cars. This project has been underway for well over two years now, and I’ve been itching to get an up-close look at the various outdoor amenities that will be open to the public. I knew about most of them — I’ve seen the plans, and have been watching them be constructed for months and months — but one that I didn’t know anything about positively delighted me:

If you need to click on the above image to get a better view, do so. Better yet, drive (or walk!) down Lathrop Street and take a look at this new piece of public art for yourself. It is absolutely fantastic: a larger-than-life person formed from hundreds of triangles made from heavy brass wire (or something like that) sitting on a stone and contemplating a mirrored sphere. I didn’t see a sign naming the piece and the artist; hopefully one will come soon. I’d like to know who made this magnificent addition to the city’s collection of public art.

Just behind the mirrored ball in the above picture you may be able to make out some of the benches that dot the public space in front of this building. That particular set of benches is arranged in a sort-of conversation pit, making it a great place to sit with others and chat. Better yet, get a snack and/or a coffee from the little coffee hut near the corner of Lathrop and Elm streets, and enjoy it while you sit. While I was there, the boards that had been attached to the coffee hut (which is made from a metal shipping container) to protect it from being damaged by the surrounding construction were being removed; I don’t yet know when the hut will open for business. But you can bet I’ll keep an eye out…

The above picture shows the coffee hut with its protective boards still attached.

In addition to sitting on the surprisingly large number of benches scattered around the front of the building, I was eager to check out the building’s narrow north end, where a set of large “sitting steps” have been constructed. The steps themselves are made of concrete, but they also have a number of wooden benches affixed at various points, many of which are designed for reclining: 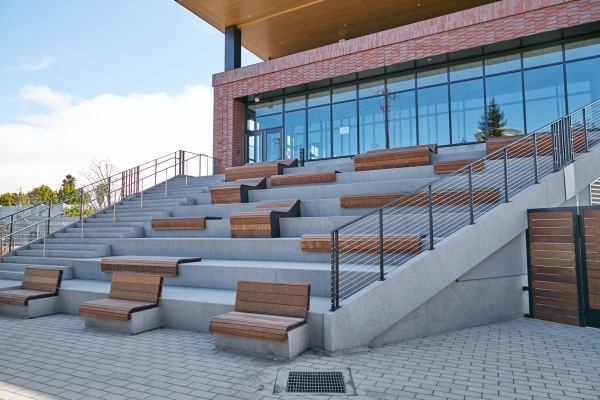 This area seems to be designed to act as a small outdoor theater; the audience seating all faces a narrow outdoor patio plus the sidewalk and bikeway. Otherwise, the view from these steps isn’t that exciting, unless you are into trainspotting: 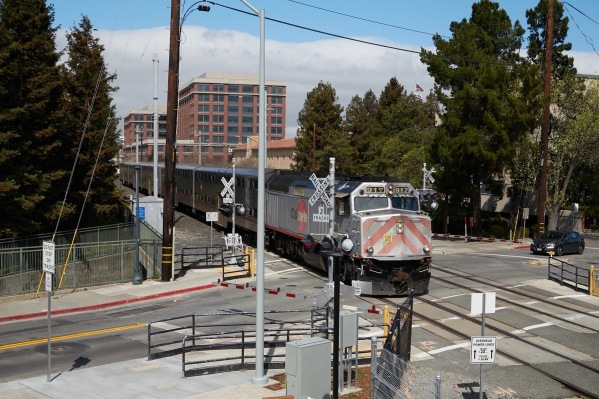 From the top you can get a nice overhead view of Redwood Creek and the landscaping on the building’s Lathrop Street side:

The 1180 Main building is surrounded on two sides by the ELCO Yards project site. In the above picture, the property across Lathrop Street (where the palm trees are, and beyond) is where Hopkins Acura operated until their recent move to the Boardwalk Auto Mall. That property will be cleared to make way for a multi-story residential building (and the tip where the palm trees are will, I believe, become a community garden).

Across Elm Street from 1180 Main Street (not visible in the above picture), most of the block will be cleared to make way for a second multi-story residential building. In fact, while I was there, the clearing work had already gotten underway:

The particular building being torn down sat across the parking lot from the Main & Elm Restaurant, which also will be torn down. Curiously, though, the little single-story office building at the corner of Main and Elm streets will remain; that building occupies the only part of the block that is not part of the ELCO Yards project.

Elsewhere within the development area, the Roller Rink still stands. However, I did see that the metal Perry Feeds shed is coming down. Rather than using heavy equipment, though, it appears that it is being taken down by hand (at least for now; the heavy equipment may move in later):

This may be so that parts of the building can be reused in the replica that will occupy this site in the final project.

Eventually I got moving again and headed to the other side of Highway 101 to see what was going on over there. As it turns out, not much: I saw no active work going on when I visited. But I did take a peek at the section of Maple Street that is being absorbed into the 1548 Maple Street project, and was interested to see that that portion of road is gone now:

The pile of dirt to the right is where the (temporary, I guess) concrete block retaining wall had been. The elevated section of land to the left, behind the stacks of white plastic-encased platforms, is where the county’s Navigation Center will soon be constructed. This view, in case you aren’t familiar with the area, is from the eastern end of Maple Street, looking back towards Highway 101.

Over the last couple of years there have been times when I’ve been awed by the amount of construction going on in Redwood City, but I have to think that we have never had quite this level of construction (if you count demolition, which I do) going on at one time within the city’s borders. It is simply amazing. And of course it gives me a lot of places to walk to…