Now that they are open I wasn’t planning on saying much more about Redwood City’s new Chick-fil-A restaurant — in my book their product is nothing to write home about, and I have no interest in getting into political issues — but I perked up when our City Manager, while speaking at last Monday’s City Council meeting, acknowledged the traffic issues that have arisen since the restaurant opened. I don’t know if the troubles have yet been sorted out, but I did witness them for myself. Last Friday night my wife and I were driving back home from the East Bay, and as we got off of 101 southbound at Whipple Avenue I noticed an extremely long line of cars stretching towards us along Veterans Boulevard from the Whipple Avenue intersection. As the signal changed the cars wanting to turn right didn’t move; cars were also backed up along Whipple Avenue between Chick-fil-A’s driveway and that intersection. I don’t know how many of the cars backed up on Veterans were heading for the Chick-fil-A and how many just wanted to turn right on Whipple for other reasons, but it was a real mess. I was quick to realize what was going on, and so rather than joining in that long line, I headed straight through the intersection and instead turned right on Brewster Avenue.

Our City Manager indicated that the city’s traffic engineers and police officers had been helping to sort out the traffic, and that the city was planning to re-stripe the streets in some manner. I haven’t been back to the intersection since then, so I don’t know if the planned changes have already been made, but I will: I’m really curious not only to see what they’ve done (or plan to do, if they haven’t made the changes yet) and how effective those changes are. Certainly we can’t have people backing up onto 101 just because of a fast food restaurant.

This week I thought I’d take a brief break from talking about commercial development and instead talk about development in some of our residential areas. I took a long, meandering walk through a number of our residential neighborhoods, looking for active remodeling projects. I knew there were a lot, and my walk certainly confirmed that. Most blocks seemed to have at least one significant remodeling project going on, and where there was one, often there were two or more. And nearly all of the remodeling projects I observed were not small, with many being complete tear-downs.

To be fair, I did count among the “active” remodeling projects a number that aren’t actually undergoing work at the moment, but have been fenced (for some time now!) to be completely torn down and replaced. The majority of projects in this particular category are being brought to us by Thomas James (“TJ”) Homes, a custom home developer who has snapped up a great many properties in both Redwood City and San Carlos and is now striving to gain city approval for the designs of their replacement homes. TJ Homes projects are particularly obvious: the construction fencing they use is branded with the TJ Homes logo, and they all seem to have a rather prominent address sign mounted on those fences, as you can see here for their project at 303 Iris St: 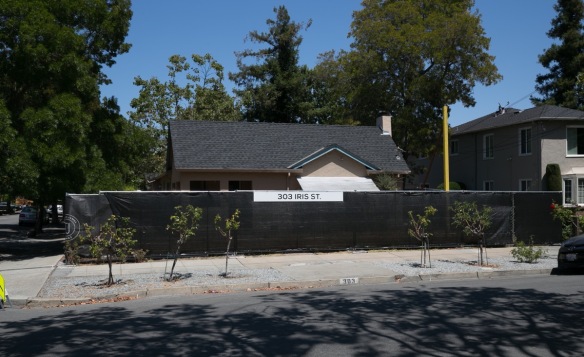 As I walked I must have passed about a half-dozen TJ Homes projects, but there are quite a few more out there.

303 Iris, shown above, is on one of those blocks with multiple projects going on. Just a couple of doors down is this nice little place, which appears to just be getting a spruce-up, at least in the front: 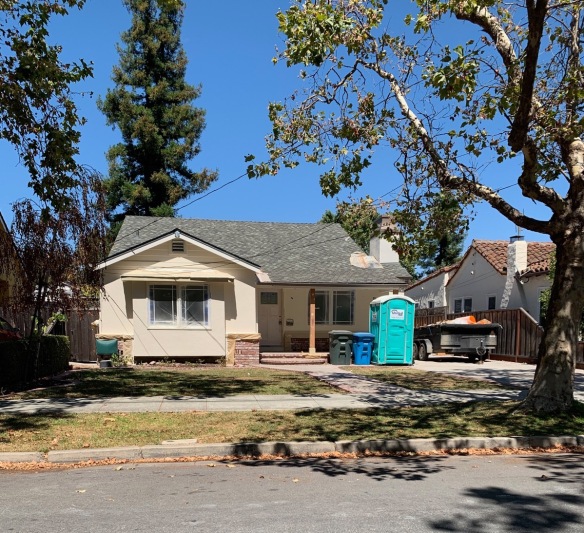 And on that same block, but on the other side of the street, is this project: 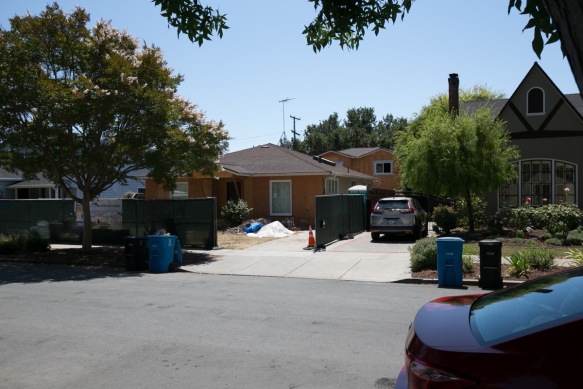 Here, the house itself appears to be getting a small expansion and a spruce-up, but the real change is towards the back of the property, where the single-story detached garage appears to be getting topped with an Accessory Dwelling Unit (ADU). ADUs are pretty popular in Redwood City these days; I saw at least three of them under construction on this one walk alone.

As I mentioned up front, though, most projects are far more than a simple spruce-up. For instance, there is this one, which appears to be all-new, on the 200 block of Lowell Street. It has a very modern design that really catches your eye as you go by: 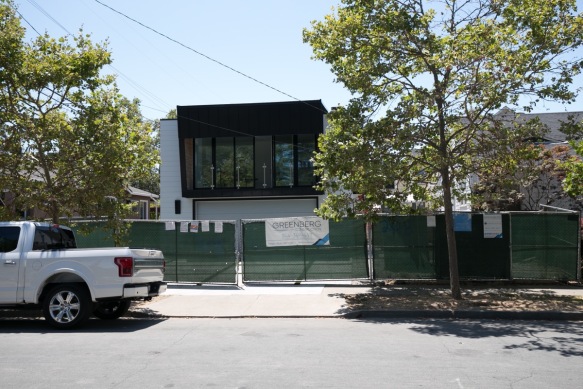 I don’t know if this is a spec project that will be going up for sale when completed, but if it is, I want to tour it. If the inside is anything like the outside, it should be a fascinating place.

On my wanderings I just had to check in on the 17-unit townhouse-style condominium development that is being built by North Star Academy, at the corner of Harrison Avenue and Cleveland Street. This of course is not a remodeling project like the others, but it did replace seven single-family homes. In any case, it is zipping right along: 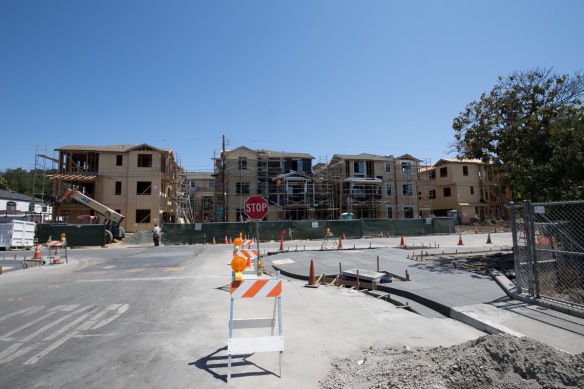 Getting back to single-family home remodels, this one, which is just a couple of doors down from the above project, appears to be an ADU (above a detached garage): 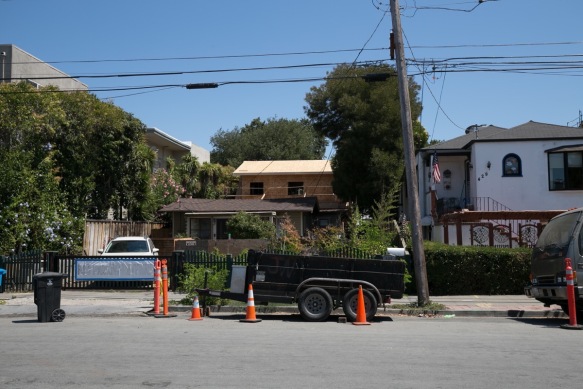 And are is one, on Goodwin Avenue, that seems to be in the early stages. It’s a bit hard to tell just how extensive this remodel will be, but it doesn’t look too extreme: 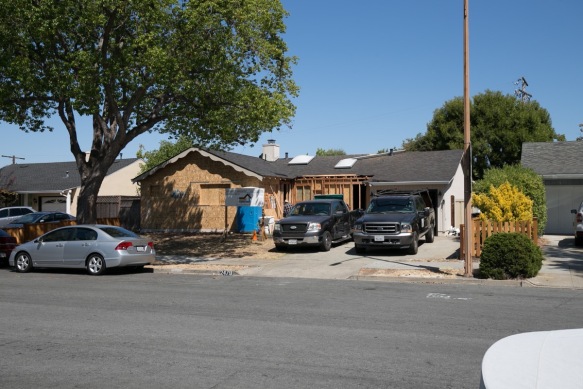 Most of my walk was somewhat aimless, but I did have one or two specific projects I wanted to take a look at. One was on Connecticut Drive, a TJ Homes project that is getting some pushback from the neighbors due to the beautiful old oak tree on the property. That tree is due to be torn down along with the small house that sits beneath it: 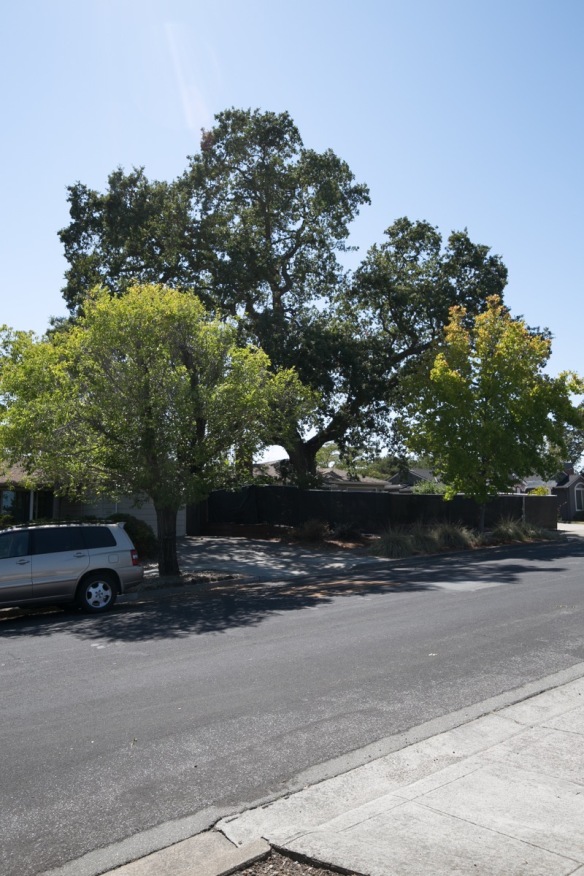 Beneath this enormous oak you can just make out the roof of the one-story house slated for replacement. Truly this is indeed a gorgeous tree; if it is in good health, I hope the neighbors prevail in their attempt to preserve it.

I ultimately crossed Woodside Road so I could check on another house project I haven’t visited a while: 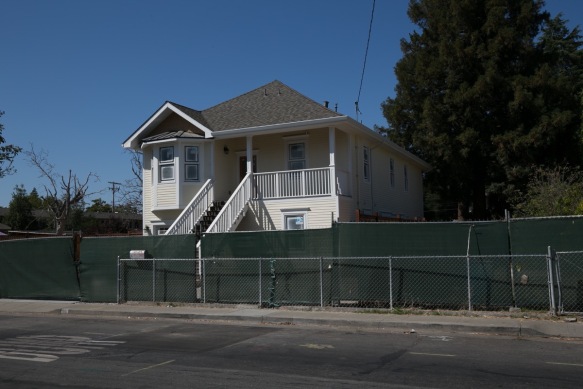 Two years ago this charming house, located at 49 Orchard Ave., was lifted up and the ground-floor garage, along with what I presume is some living space, was added underneath. I first visited this project back in May 2019, and at that time it had been lifted and the lower level had been framed. Since then, some 14 months later, the project remains unfinished (although it looks close), and there was no sign of activity. I’m a bit curious as to what is taking so long. The original house, which was built in 1907, sat on a large (a little over 1/3 acre) lot that is supposedly being divided into three. Fencing has been installed to divide the three lots, with the house sitting on the center parcel. As I understand it the plan is to build a new single-family home on each of those other two lots. But so far, except for fencing that divides the lots from one another, nothing has been done on either of the two adjoining parcels, and in fact I’m not sure that the parcel has even been legally divided yet.

This is just a small sampling of the remodeling projects going on in Redwood City right now. During Monday’s City Council meeting it was noted that our state’s stay-at-home orders have actually seemed to spur the interest in remodeling. To me that seems a bit counterintuitive, but perhaps forcing people to spending a great deal of their time at home is causing them to really think about how they use their houses, and what they really want in a home. In any case, most of the remodels I observed had to have been planned and designed, and permits obtained, before the shelter-in-place orders were handed down, so they can’t really be counted as COVID-19-related activities. But new requests for building permits continue to flood into Redwood City’s building department, so don’t expect any letup on the residential construction front.

Speaking of the building department, I was interested to hear (in that same City Council meeting) that between 1/2 and 3/4 of Redwood City’s building inspections are being done virtually (with the rest still taking place on site). Apparently the building inspectors are doing a video call with the builder, and having them aim the cellphone camera at whatever the inspector needs to see. I gather that things are going so well that this process of video inspections may continue even after things return to normal. Chalk up another upside for the Coronavirus…

As part of a COVID-19 “Redwood City Strong Together” fundraising campaign, the Redwood City Parks and Arts Foundation recently hosted a contest for artworks to be used in that campaign. Yard signs featuring the top three designs, and a flag showing the winning design, can be purchased from the Foundation’s website. Buying one of these is a great way not only to help with the campaign, but to show your pride in your community.

For those of you who are missing being able to attend the various community-building events that Redwood City puts on throughout the summer, be aware that one of them — Free Shakespeare in the Park — is going ahead, albeit virtually. We may not be able to sit in the grass in front of Sequoia High’s beautiful main building and watch the performance live as we’ve done in years past, but we can still see what is being called, for this year at least, “Free Shakespeare At Home.” The performances — this year they’re doing King Lear — will be performed live, and will be streamed on YouTube. The performances sponsored by Redwood City will take place on three consecutive weekends starting August 15. For the dates and times, plus a link to where you can see the performances, head over to the Free Shakespeare website.

In a similar vein, it appears that Redwood City will be organizing “drive-in movies” out at the port, beginning sometime in August. I have yet to learn any specific details, but keep your eyes open; this sounds really fun.

Two very generous supporters of Second Harvest Food Bank of Silicon Valley are currently matching donations made between now and the end of August, up to a total of $250,000. Effectively this doubles donations of almost any size from people like you and me, but only if those donations are made by August 31. Second Harvest is a truly worthy charity that does extremely important work, especially in this difficult time. If you are able to make a donation to help people from going hungry, do consider giving to Second Harvest Food Bank.