By the time the official “shelter in place” order came down for the six Bay Area counties (now extended to all of California), my wife and I had already been keeping close to home for about a week or so, so the official order didn’t have too large of an effect on us. Fortunately, unlike with a shelter-in-place order such as is sometimes issued due to a gas leak, say, we aren’t sheltering from the environment itself, and thus we are still allowed to go outside, whether that be for exercise or simply to maintain our sanity. Although I am now a lot more circumspect when I am out and about, I continue to take my walks, and continue to take the pulse of our city. And although things are quieting down somewhat, meaning that there is less activity about which to write, I plan to continue what I do. After all, I did start this blog partly because I needed the exercise…

Downtown Redwood City is a lot quieter these days, of course, but it isn’t a ghost town by any means. A surprising number — the vast majority, in fact — of restaurants are still in operation, although of course they aren’t letting you dine in. Instead, they are doing what they can to provide high quality, tasty meals for takeout or delivery. The meals run the gamut, from fast food to deli sandwiches to ice cream (Baskin Robbins is still open, although they’re limiting the number of patrons who can be in the store at one time) to high-end dinners to coffee and a pastry. The other night my wife and I ordered from the recently opened Nam Vietnamese Brasserie, and we are very glad we did: the food was top-notch, and the service (we chose to pick it up, rather than have it delivered) was excellent. They even added a free orange to our order, with a note:

They were most thankful for our business. Indeed, although the government will hopefully help out small businesses such as these, our continuing support during these troubled times not only helps to keep their spirits up, it keeps some badly needed cash flowing that just might enable these restaurants, and at least some of their employees, to hang on until we are once again free to dine in. On Wednesday morning my wife dropped into Mademoiselle Colette — she was craving a latte — and Delphine Sourisseau, the manager, noted that “every purchase matters.” Whether our purchases are enough, we’ll see. But I feel we have to try, in an attempt to shorten the time between when the shelter order is lifted and when things return to something approaching normal.

I spent a lot of time this week running around downtown and up and down Woodside Road (I have yet to fully canvass El Camino Real), trying to figure out who is still open and serving. As I said earlier, I was surprised at just how few restaurants have actually shut down altogether. Some of those were less of a surprise than others: the US Chinese restaurant on El Camino Real across from Target is closed for the duration, for instance, as is Bluefin Sushi (on Broadway, in downtown Redwood City), and the relatively new Rolled Up Creamery:

More often than not, though, restaurant doors or windows had signs indicating how you can order and receive your food. For instance, this one is posted at Redwood Grill, in Woodside Plaza:

Redwood Grill is one of the most flexible: you can call, or order online using either GrubHub, Postmates, or Toast TakeOut. Their menu, of course, is online and can be found here.

Finally, on the delivery front, DoorDash surely needs to be giving major kudos to the guy who thought up their “DoorDash Kitchens”: 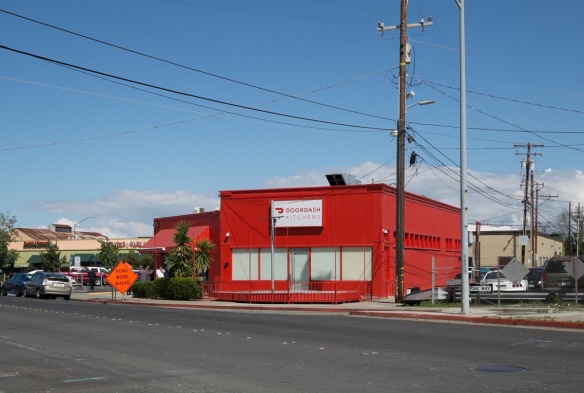 You have to look closely, but just behind that orange “road work” sign you can just make out the line of delivery drivers waiting to pick up orders. I think that Redwood City’s is one of the first of DoorDash’s kitchens, where a variety of restauranteurs prepare food exclusively for delivery via DoorDash. I’m guessing that it won’t be the last!

I’m considering how best to make what I’ve learned public, but I’ll likely submit everything to the list being hosted at The Six Fifty (that’s our area code, in case you were wondering about the name). Even without a list, so many places are still serving that I’d recommend just checking with your favorites: they are likely to be making food that can be delivered or you can take home. And, of course, the places with drive-thru windows (mostly fast food) and places that normally deliver (mostly pizza places) are still very much in operation, so do take advantage of those.

These days we are supposed to refrain from “non-essential” activity. It did a lot for my psyche to be able to do our regular Meals on Wheels delivery route with my wife this week, since Meals on Wheels is understandably considered an essential service. And it is a real relief to see that street sweepers are still roaming our streets, trash is being picked up, mail and packages are still being delivered, and so forth. Such activity serves to make these difficult times feel more normal. Along these lines, although they not be strictly essential according to the shelter-in-place order, I continue to see a fair number of gardeners still going about their business, and a number of contractors still working on houses and buildings. For instance, on Wednesday I watched shingles being delivered to the unprotected roof of a house in the middle of an extensive remodel in the Eagle Hill neighborhood:

Given the weather of late I can understand wanting to at least make this remodel weather-tight. Whether or not work will continue after that, well, we’ll see. Essential or not, as long as jobs like this can be done while maintaining sufficient “social distance,” I can see value in allowing them to continue. As with our restaurants, supporting independents like this may prove key to keeping our economy running and restoring it to some semblance of normal in a couple of months. And the more people we can keep from running out of money, the better.

Enough of that. While I was out walking I was briefly taken aback to see that Redwood Chapel — the recently closed funeral home on Woodside Road near Gordon Street — is already taking on a new life: 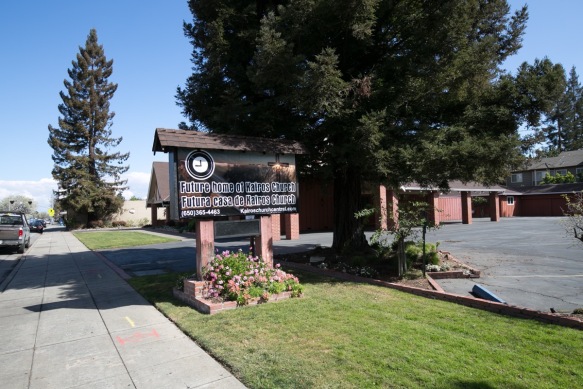 The “For Lease” signs are down and this sign is up, advertising the location as the “Future home of Kairos Church.” Kairos Church currently meets on the Sequoia High campus (in Carrington Hall, I believe), but will soon be moving to permanent digs in the old funeral home. This is a great use for the property: the required conversion is minimal (assuming that the chapel portion of the building is big enough for now) and there is an abundance of surface parking.

Over on Main Street, I was interested to note that the 851 Main Street project has reached the point where the historic storefront no longer has to be swaddled in protective clothing: 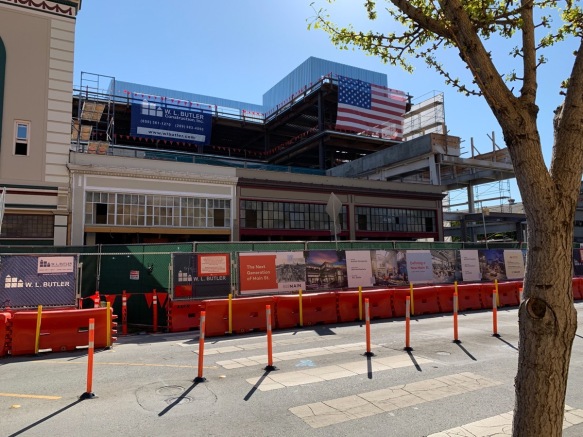 It appears that work on this particular project may have ground to a halt, presumably for the duration of the shelter-in-place. I will note, however, that a handful of other large projects in the area — including Stanford’s Middle Plaza project in Menlo Park and the Sunrise Senior Living Facility being constructed on El Camino Real in North Fair Oaks (immediately adjacent to the Planned Parenthood clinic) — continue to show activity. Perhaps they are just doing needed work to ensure that the work sites are stable and safe, or perhaps they have special dispensation to continue. Whatever the reason, don’t be surprised to see activity at sites such as these.

Although we’re currently living under a shelter-in-place order, there are still a number of ways we can safely and legitimately get out and about. I see far more people out walking than usual, something that I truly hope continues once the shelter order is lifted. People are still out shopping, at least where it is allowed, and if you need to get out more consider picking up food from a restaurant rather than having it delivered. Assuming it works as well for you as it did for me when picking up from Nam Vietnamese, you’ll find the process to be both safe and simple.

Finally, let me put in a plug for local journalism: our changing economy is having a dire effect on our local sources of news, and they very much need our help. Although some of the local papers have dropped their paywalls, advertising revenue is way down, and they are looking for other sources of funds. Your subscriptions would greatly help. Whether your local paper is The Daily Journal (disclaimer: I also write for them) or Palo Alto Weekly/Palo Alto Online, or some other, please help if you can. Local journalism is especially important at this difficult time, and we need these organizations to continue.

2 thoughts on “Out From Under the Shelter”